Blockchain Technology Solutions For Your Business

Blockchain technology might be best known for its use with cryptocurrencies such as Bitcoin and Dogecoin, but that’s just one type of blockchain. There are other varieties that could prove useful in certain sectors. Let’s take a look at what they are, how they might be used, and what some of their benefits and shortcomings are.

The largest benefit of the blockchain, which is essentially a decentralized ledger of transactions, can be seen in Bitcoin, but the shortcomings are also notable. Blockchains consume a considerable amount of energy to operate, making them difficult at best for businesses to take advantage of. Bitcoin operates using what is called the public blockchain; as such, it cannot store sensitive information or proprietary data without putting it all at considerable risk. Here are the four varieties of blockchains that organizations can utilize.

The public blockchain is the most open form of blockchain, and anyone can participate in transactions and maintain their own copy of the ledger. The only prerequisite is a connection to the Internet. The public blockchain was the first type created, and it is the most common one used by cryptocurrencies, but it has other applications that could be considered in the future, such as voting and fundraising. All of these uses are only possible due to the openness of the system.

While the openness is a great benefit to the public blockchain, there are other challenges that can get in the way of its use–namely the fact that these transactions happen at a slow rate, which also limits the scope of the network in question.

The efficiency of this centralized system makes the entire blockchain operate more smoothly, but at the same time, security is hindered somewhat. Some of the key uses for a private blockchain include supply chain management, internal voting, and asset ownership–all uses that really want that security. It is critical that any organization seeking to implement a private blockchain consider this weakness.

When you combine the public and private blockchains, you get a solution that can leverage the advantages of both. A hybrid blockchain allows users to connect to the public network without sacrificing privacy. Organizations can use customizable rules to keep data secure.

There are some downsides to this solution, though. A hybrid blockchain lacks the transparency of other blockchains, and as such, there is no prerogative for organizations to go through the adoption process. Despite this, there are some notable uses for a hybrid blockchain. For example, industries like real estate and retail might find it palatable.

Have you considered the use of blockchain technology for your organization? The latest blockchain technology solutions can be a great boon for your business if implemented properly. Contact AE Technology Group for an IT consultation; let our technicians help you determine the best path forward. To learn more, reach out to us at (516) 536-5006. Cloud-Hosted Tools Your Business Should Consider How to Improve MFA with the Use of Adaptive Authentication 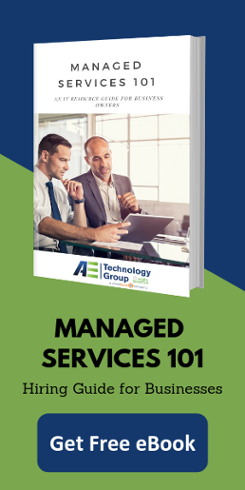